Following the recommendation is important even if you are using non-corrective contact lenses. The risk of developing eye problems due to breach of protocol will not be smaller just because the CL:s are purely cosmetic CL:s.

Until the late 1990s, standard contact lenses were only available for use when awake. Leaving the contact lens in the eye during sleep was definitely not recommended since it could lead to a situation where the cornea would not receive enough oxygen. Because of this, the wear schedule was pretty much the same for all standard contact lenses on the market: put them in when you wake up and take them out before you go to sleep.

When the silicon hydrogel contact lens was launched in the late 1990s, it was a game changer. The silicone content made the lens much more gas-permeable and it was now possible for the cornea to get enough oxygen under the CL even when the eyes were closed. CL manufacturers started producing contact lenses that could be kept in the eye during sleep.

However, just because a CL is made from silicon hydrogel, that doesn’t mean that you can pop it in and leave it there forever. It is very important to follow wear schedule provided by the CL manufacturer and not keep the CL in longer than recommended.

Extended wear CL:s that are recommended for several weeks of continuous use are sometimes referred to as continuous wear or CW contact lenses. A popular choice in this category is the CL that can be kept in the eye for 30 consecutive 24-hour periods. Only having to change your CL:s once a month is like a dream come true for many CL users. As always, follow the recommendations from the manufacturer. If the recommendation is to change the CW CL:s every month, don’t let them stay in for 90 days just to save some money or because you are forgetful about buying new CL:s in time.

Don’t deprive your corneas of oxygen 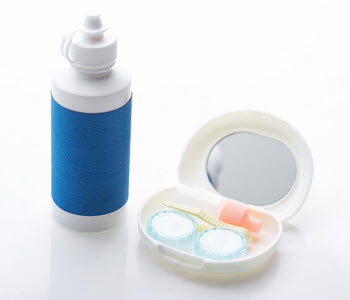 It might be tempting to leave your DW CL:s in when falling asleep. After all, its nice to be able to go to the bathroom in the middle of the night without having to fumble around for eyeglasses first. However, leaving DW CL:s in the eye during sleep is really not a good idea.

Why? Because CL:s made for daily wear only do not let much oxygen through. When your eye is free from CL:s, your cornea will get oxygen from the air. When you are wearing CL:s and is keeping your eyes open, your corneas can still get oxygen from the air because oxygen will dissolve in the tear film that is coating the eyes. The tears will the transport oxygen to the cornea.

If you close your eyes, you block them from getting any oxygen from the air. When you are sleeping without CL:s, the cornea will get oxygen from blood vessels on the inside of your eyelid.

If you keep your eyes closed while wearing a DW CL, the contact lens will block so much of the oxygen released by the blood vessels that your cornea won’t get enough oxygen. This can lead to several medical problems. Falling asleep with your DW CL:s in once in a blue moon will usually not cause a serious problem for otherwise healthy eyes, but it is a bad habit that should be nipped in the bud because repeated and/or prolonged corneal hypoxia (the cornea not getting enough oxygen) is dangerous for the eyes and you can have a serious problem brewing without you noticing it at the initial stages.

A contact lens recommended for extended wear (an EW CL) will let much more oxygen through than a DW CL. That is why the risk of corneal hypoxia is much lower when sleeping with an EW CL in the eye. Modern DW CL:s will typically let through at least 5 times more oxygen than a standard DW CL.