LASIK (Laser-Assisted In Situ Keratomileusis) is a type of eye surgery that can correct myopia, hyperopia and astigmatism. A laser or microkeratome is used to reshape the cornea. The first step is to create a thin flap on the eye. This flap is then folded and the tissue beneath it is remodeled. The flap is then repositioned.

Proper post-operative care is important to prevent complications. You can be expected to be prescribed eye drops that are both antibiotic and anti-inflammatory and it is important that you keep using them according the prescription even if your eyes feels great soon after surgery. To prevent dry eyes, moisturizing eye drops are used as well. Post-operative care will also involve resting the eyes and using dark sunglasses to protect the eyes from bright lights.

In some eye clinics, a protective contact lens is placed on the eye right after surgery and removed by the surgeon a few days later.

In 2008, The American Society of Cataract and Refractive Surgery published a patient satisfaction meta-analysis of over 3,000 peer-reviewed articles from international clinical journals. This study showed a 95.4% patient satisfaction rate among LASIK patients. This data came from the prior 10 years. 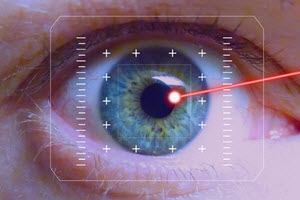 Prior to the procedure, numbing eye drops will be administered. You may also get a mild oral sedative to help you relax.

1.) During surgery, the eye is held in place by a soft corneal suction ring. This causes a temporary dimming of vision.

N.B! During LASIK surgery, the eye is held in place by a soft corneal suction ring. During the procedure, the suction can make small blood vessels in the eye burst. This isn’t dangerous, but subconjuvital hemorrhage can make the white of the eyes look red for a few weeks.

LASIK is a medical procedure and there are always a risk of side effects and complications, or that the surgery doesn’t produce the high degree of visual correction desired.

Examples of risks listed by the U.S. Food and Drug Administration. 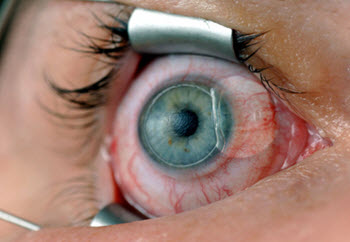 The LASIK Quality of Life Collaboration Project (LQOLCP) is a collaboration between the U.S. Food and Drug Administration, the U.S. Department of Defense, and the National Eye Institute. It was launched in 2009 and examined patient-reported outcomes for LASIK. In 2014, the findings were published.

Here are some of the findings:

Classic LASIK makes simple corrections for myopia, hyperopia and astigmatism. With Wavefront-guided LASIK, the surgeon will instead make a spatially varying correction. The surgeon will guide the computer-controlled laser based on measurements from a wavefront sensor.

The goal with Wavefront-guided LASIK is to create an optically perfect eye.

A risk factor inherent to Wavefront-guided LASIK is that the laser needs to correctly register eye positions in all three dimensions and track the eye in all the possible directions of eye movement. If it doesn’t, pre-existing aberrations can be worsened instead of improved by the procedure.

In older patients, the potential benefits of Wavefront-guided LASIK may be outweighed by the risk of experiencing problems caused by scattering from microscopic particles in the eye.

LASIK is usually less painful than LASEK when the eye is healing and vision usually recovers more quickly with LASIK. This is mainly because with LASIK, the laser ablation is carried out in the deep corneal stroma.

You can read more about LASEK in our LASEK article on this site.

A PIOL is implanted surgically into the eye. The eyes natural lens is left in the eye and not altered.

Radial keratotomy (RK) was developed in the 1970s. Today, the technique has largely been supplanted by newer methods (chiefly LASIK and LASEK) but it remains a fairly popular choice for the correction of astigmatism in certain patients. During RK, a diamond knife is used to make incisions that reach deep into the cornea.

This is a younger technique than LASEK and standard LASIK, and have borrowed elements form both methods.

The surgeon will cut the cornea’s outer layer, but instead of using the fine blade used for LASEK the surgeon will use a blunt, plastic oscillating blade.

Epi-LASIK will usually not involve using alcohol to loosen the epithelial sheet. A plastic blade is used instead. There are exceptions though, some Epi-LASIK surgeons do use alcohol to improve the quality of the flap.

After Epi-LASIK, a special contact lens is placed in the eye to keep the flap in place while the epithelial cells grow back.