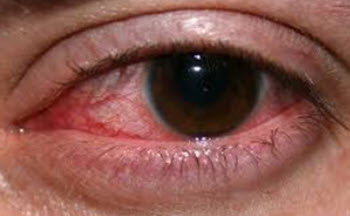 This is a type of keratitis associated with CL wear and caused by endotoxins released by gram-negative bacteria. The eye reacts to the endotoxins with an inflammatory response in the anterior segment of the eye. (This is the part of the eye that includes the cornea, the lens, the iris and the ciliary body.)

Usually, very little time passes between having no symptoms at all and having full-fledged CLARE with intense eye pain, copious tearing, super-sensitivity to light and a seriously red eye. There are plenty of examples of patients going to bed without any symptoms as all and then being abruptly woken up later that same night by intense eye pain and all the other symptoms of CLARE.

Gram-negative bacteria from various species and genera have been found in the eyes of patients with CLARE. A few notable examples are Haemophilus influenzae, Pseudomonas spp and Serratia spp.

It is possible to have CLARE in just one eye, but if you get CLARE in one eye you should ideally remove your CL:s from both eyes anyway.

Once the CL:s are removed, the body will usually fight off CLARE without medical intervention. It can still be a good idea to contact an eye care professional to make sure the diagnosis is correct, check for possible epithelial disruption, and also receive advice about future CL use. In serious cases, antibiotics will be needed to kill the gram-negative bacteria.

It can take several weeks for CLARE to clear up properly and you shouldn’t use CL:s during that time. The use of steroids to reduce the inflammatory response is still under debate.

How can I prevent CLARE?