A telescope is an instrument that can be used as an aid when observing remote objects. The telescope works by collecting visible light or other forms of electromagnetic radiation. The word telescope comes from the Ancient Greek words tele, which means far, and skopein, which means to look.

An optical telescope gathers and focuses light mainly from the part of the electromagnetic spectrum that is visible to the human eye. One or more curved optical elements (usually made from glass lenses and/or mirrors) are employed to gather light and other electromagnetic radiation and bring it to a focal point. Examples of instruments that include one or more optical telescopes are monoculars, binoculars (field glasses), camera lens, spotting scope and theodolite.

When a distant object is viewed through an optical telescope, the telescope will increase the objects apparent brightness and apparent angular size.

An optical telescope’s ability to gather light and display fine details is strongly impacted by the diameter size of its objective. The objective is the primary lens or mirror that collects and focuses the light. The larger the diameter (or aperture) of the objective, the more light can come in.

Most optical telescopes belong to one of these three main groups:

A refracting telescope (also known as refractor telescope / dioptric telescope) use a lens as its objective. Divide the focal length of the objective lens by the length of the eyepiece to find out the refractor’s magnification. 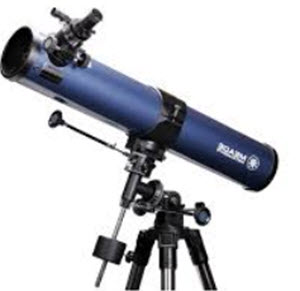 A reflecting telescope (also known as reflector telescope / catoptric telescope) use one or more curved mirrors to reflect the light and form an image.

One of the reasons why the reflective telescope became so popular was that it allowed for objectives with a very large diameter. A large objective is especially important when studying objects that are very far away, e.g. in astronomy.

This type of telescope utilizes a combination of mirrors and lenses to produce an image. With the appropriate design, it is possible to achieve a high degree of error correction and thus a wider aberration-free field of view.